The northernmost stop on our tour of Vietnam was Hanoi, Vietnam’s capital city.  I had heard great things about it – from its fascinating history to the fact that it has a diverse array of influences, including Chinese and French.

If I’m honest, the first thing that struck me about Hanoi was the traffic – I found the roads utterly petrifying.  We first ventured out during what we soon learned was rush hour, so we were thrown headlong into the chaos.  It made walking around the city somewhat of an ordeal, at least it was for me.  As someone who hails from a rural Cornish village and even in the UK refuses to cross the road until the green man illuminates, I did feel a little out of my depth.  However, there were scores of foreign tourists (many of whom looked over 50) who seemed to take it in their stride.  So perhaps I’m just a country bumpkin who struggles to navigate such situations.

When it comes to crossing the road, you just have to hope for the best as rules of the road don’t really seem to apply.  Pedestrian crossings are not observed in any meaningful way.  A pamphlet at the hotel we were staying at advised that the secret is to crossing the road is to look confident as you do so and that motorists should stop, although it’s not guaranteed.  Thankfully we did make it out in one piece and lived to tell the tale!

Funnily enough, we initially considered the roads at some of our previous stops to be crazy, such as the non-pedestrianised parts of Hoi An.  I’ve been to a few busy Asian cities but Hanoi was like nothing I’d seen before (I’ve yet to properly explore Saigon so I’m interested to see how that compares).  With 5 million motorbikes on Hanoi’s roads, you see all manner of things being transported, livestock, gas canisters, whole families, the kitchen sink, you name it.

I know I have wittered on about the city’s traffic and not yet touched on other aspects of intrigue but it is a real feature and in some ways one of the most interesting.  Vietnamese drivers are some of the most skilled that I’ve seen – they make navigating the roads look easy. There are plans to completely phase out the use of motorcycles in the city by 2030 – it’s hard to imagine what Hanoi would be like without the constant sound of revving.  We found that you quickly get used to the omnipresent chaos and get more streetwise to the surroundings.  Following this, I got a better idea about what it is that attracts people from far and wide to this city.  It has a real buzz to it, even late into the night.

One of the real highlights of our time in Hanoi was visiting the Observation Deck on the 65th floor of the Lotte Tower.  Throughout my travels, I’ve been to a lot of these sorts of things as I like to get an aerial view of a place and get to know the lay of the land.  However, the Lotte Skydeck was definitely one of the most impressive that I have seen.  It was incredible to see how far Hanoi sprawls out.

If you are a history lover then there are plenty of attractions that will be of interest to you in Hanoi, including the Hoa Lo Prison Memorial, Ho Chi Minh Mausoleum and the Ho Chi Minh museum.  It was utterly fascinating to learn more about Vietnam’s past.  It’s worth noting that many of the museums close for an hour or two during the middle of the day.

We had dinner at a casual open-air restaurant in Hoan Kiem District (aka the Old Quarter) which was a great way to watch the world go by from a safe distance.  I’d highly recommend doing this as it was a real highlight to watch rush hour in full swing.

For many reasons, Hanoi is an incredible city and is well worth visiting during a trip to Vietnam.  From the history, crazy roads, cuisine, international influences and round the clock buzz, there is nothing boring about Hanoi. 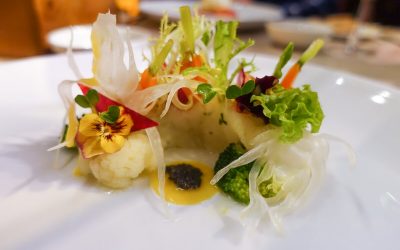 R&J at The Reverie – Saigon

On our final night in Vietnam, we decided to do something fitting to round-up what had been a truly memorable holiday.  We were back in Saigon, ready to catch out flights home to the UK the next day so we decided to go for dinner at the Romeo and Juliet restaurant at...

One of the main highlights of our trip to Vietnam was visiting Hue.  It's a popular destination in Vietnam because of all of its cultural and historical sights, which kept us busy during our time there.  We stayed at the Vinpearl Hotel and coming back after a long day...

One of the main cultural highlights of our trip to Vietnam was visiting Hue, the country’s former capital.  Located in central Vietnam by the Perfume River, Hue has a fascinating history of emperor dynasties, invasion and battle.  One of the best ways to learn more...